Dimension Stamps launched Frosty’s Fashion Frenzy (Stamp ref: 2400067a) on Create and Craft last Wednesday 4th July and I was honoured to be asked if I would make some sample cards for the show. Well, true to form I didn't exactly do as I was asked...... 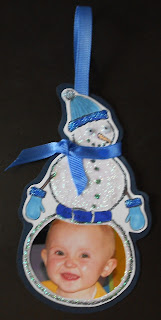 The stamps just cried out tree ornament to me, and what a fantastic way to get the kids involved with those Christmas preparations.

All I did was stamp the snowman in one of the outfits, coloured him in and cut him out. In the lower section I cut out the middle leaving a thin border (enough to attach the photo!). I mounted him onto the photo then onto some navy card adding the ribbon as a hanger and cut around him leaving a small border.

Ribbon was added for the scarf along with a bucket full of stickles and of course no tree ornament snowman would be complete without googley eyes.

Little lady is going to be busy making these for Grandparents, I think! 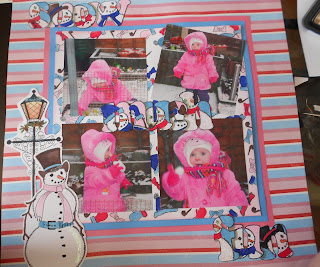 For this scrapbook page I stamped and dressed the snowman, coloured him in and cut him out. I then stamped the lamppost again coloured this and cut it out. For the lettering I used Plain Lowercase Alphabet (ref: 1801014a). I made them by stamping one letter and creating and mask for it before I stamped the next. To add the snowmen into each letter, I trimmed the mask of the letters each side of the letter I was working on and added the snowman image. It was quite time consuming and fiddly but well worth it in the end as it gave the page a sense of depth but it was actually as flat as a pancake, so perfect for adding to the album. I then coloured the lettering in, in alternate colours and added a bit of sparkle, I added shadow to the letters with a grey pen.

For the background of the photo's I just randomly stamped the snowman's clothes and coloured it all in and lightly distressed around the edge.

To make it up I chose a matching 12 x12 paper, matted up the photos onto the stamped background then onto two corresponding papers and placed this centrally on the paper. I then added the lamppost, snowman and lettering. 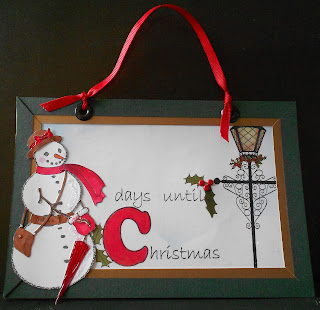 I just couldn't resist having a play!  To make this "Christmas Countdowner" I cut an A4 piece of thick green card in half (A5) to create the back and I cut the other half into strips to make the frame, I matted these onto thicker strips of gold card. I then created the background (not that you can see it in the picture!) I tore a couple of post-it notes to make hills and using distress inks created a sky, I then used a mister to give it a molted effect. I left this to dry for a while. Next I stamped a Mrs Snowlady using as many bits as possible, theses were then coloured in cut out and assembled. Once the background was completely dry I stamped and coloured in the lamppost. I then positioned all the frame and the Snowlady to find out where I could stamp my words and leaves. For the words I used  Plain Alphabet with Words (stamp ref: 2400050a), and the Krystal Tips Upper and Lowercase Alpha (Stamp ref: 2400012a). These were then coloured in.

To finish off I covered the background with sticky backed plastic (you could also use acetate!), added the frame, Snowlady and brads. I then stuck all this to the backing cards. Added two eyelets and ribbon! The Snowlady was then glittered and glossed up!

To add the number of days just use a dry wipe pen!

I had soooo much fun using these stamps, I really recommend you check out the Dimension Stamps blog to see what ideas the very talented design team have come up with, as they actually have made some cards hehehe!